The Shape of Things to Come Lives in a Tunnel Beneath the Town: Occasional Beasts: Tales, Story Notes # 14: "The Land Lord."

Delayed a bit. Dealing with real life. And politics.
Anyway...

After I went through a break-up in 2005, and after a year in-between, I rented an apartment in Hayward, California. I would often take walks to a Starbucks (which is something I do rarely nowadays) or for food, which was about a mile away. Along the way, I would pass over a small bridge...which inundated me with the worst smells.

Where do writers get their ideas? Every-damn-where.

The seed was planted, that bridge is the opening sequence in my 15,500 word tale, "The Land Lord," that wraps up my collection, Occasional Beasts: Tales. We--my publisher and I--decided to bookend the collection with the two longest tales.

That bridge, those smells--I wrote them down way back when, started to build a story, but wasn't sure about the characters. I felt it needed something more, or needed to be told in a different way. I shuffled the two characters out--Regina and Jeff--and worked with a gay goth couple for a bit. That didn't do it, though I liked those characters enough to save that version and might drop them into another tale. I went back to Regina and Jeff and found their true paths, their voices, and finally could lock in and go for the ride.

But I needed something more between that opening and where it all ended up.

That's when the town itself, Hayward, helped out. Everything described in "The Land Lord"--the homeless, the hookers, the grimy feel of things--was inspired by that place.  The broken down auto shops.  The closed down businesses, everything became a part of the body...as well as one curious addition: an element from the movie Jacob's Ladder.

Jacob's Ladder is a subtle, hallucinogenic mind-trip, those subtleties consistently nibbling at the edges; okay, it's not always subtle, there's some pretty heavy-duty nightmarish stuff, too.  Scenes in the movie where something moves, quivers off to the peripheral--or perhaps even right in front of the main character, like with the homeless man on the metro (bus, well, I don't remember; haven't seen the movie in too long and need to rectify that), when a strange appendage slips out from beneath his coat, before slipping back under. Did Tim Robbins' character see that...or was it just a trick of his tired eyes and mind?  THAT was the stuff I wanted. So I threaded in scenes where that kind of feel, that undercurrent of something not right--a twitch beneath an eye, for example; other physical oddities that might seem like nothing, but within the fabric of the tale, they help layer the overall odd tone--holds more weight because it only adds to the blurring of what's real and what's actually going on. That weight of something weird always nibbling at the edges was key for me in getting through the escalating dread and on to the resigned, bleak finale.

All of the pieces in place so that our narrator, Jeff, could meet the land lord. Not a landlord. The Land Lord. That thing that lives beneath the town...

Here's a sequence where Jeff has stopped one of the people who wanders the streets. Homeless? Well, you'll see.  It's late at night as this conversation takes place...

I stared at him as he searched for the words, his cadences crisp, his focus narrowing; no repetition driving him now.

“In reality, one just needs to adjust, I guess. To let go. To give in,” he said, amused, as if this epiphany meant the world to him.

Despite the more tranquil impressions he exuded, I felt my anger rise. “Christ, I should have known not to expect any real answers from a man in league with the vagrants, the homeless—

“Homeless? You think these people are homeless? They all live in the town. They’re all essential parts of the town. Like organs, or maybe blood. They flow through the town and the town thrives.” He glared up at me, eyes steely, features rigid.

“I own a shop like this one down the road, auto repair.” His focus altered, he continued: “I bought it a year ago, the rent was good and cheap. I had employees, the whole deal. But I was only open for about six months, lost my employees, lost myself as well.”

I looked deep into his eyes. He was here with me right now, not mentally somewhere else. He’d even stopped his pacing. I knew he was telling the truth. His take on the truth, at least.

“What do you mean you lost yourself?”

“I’ve been living in the building since my business closed down. Couldn’t afford two rents so I kept the business place, hoping to reopen but…it doesn’t care.”

“I slipped, heard about it, checked it out, and now… I need it but don’t want to give in to it, can you understand?”

He instantly switched into paranoia overload, looking everywhere, over his shoulder, over mine, a long trespass to the tunnel. Somebody’s listening…

“The land lord,” he whispered.

“A landlord?” The landlord again?

“No. Not a landlord, but the land lord. A different entity than a landlord.” He split my one word into two, an ax to the trunk of a tree. I was at a loss. “Completely different.”

His whisper circled, then, swooped down as an owl snatching its prey. His tone changed—mutated—the chilled serenity of the whisper ground to gruel and devoured by his Mad Hatter alternate-ego. “Fucking stupid, trying to resist it now that I’ve had a taste. You’re feelin’ it, too, I can sense it in you. You should join us.” His smile grew wide, then crumbled under the weight of something I could not imagine. “No, you should leave, now… Leave now!”

Which, of course, brings me back to one of my favorite themes: addiction.  There's a sense that drugs are behind everything in this tale, but look deeper.  Look into that tunnel, to get to the truth.

Occasional Beasts: Tales is available to purchase now! Check the hyperlink by clicking on the title or right HERE.

I've enjoyed this overview, slim as it may be, of the tales in my collection. Looking back on them brought some memories I enjoyed, and that only could have happened while digging into these story notes.

Ah, but what's next? There's some anthologies out or out soon, with tales by yours truly in them. I'll give you some details about them soon!

Here is a photo of...The Gates of Hell, in New Jersey. It's a tunnel. Not unlike the tunnel "The Land Lord" lives in, perhaps... 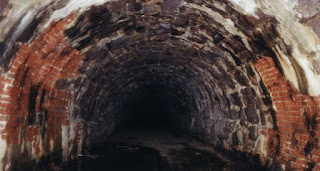 John Claude Smith
John Claude Smith has had two collections (The Dark is Light Enough for Me & Autumn in the Abyss), three limited edition chapbooks (Dandelions, Vox Terrae, The Anti-Everything), and one novel (Riding the Centipede) published. The novel was a finalist for a Bram Stoker Award for Superior Achievement in a First Novel. His new 23k chapbook containing three weird horror tales in an urban setting, The Wrath of Concrete and Steel, is not a limited edition, as it is available via the publisher now and Amazon soon. He splits his time between the East Bay of northern California, across from San Francisco, and Rome, Italy, where his heart resides always. Words Matter! All writing here © John Claude Smith